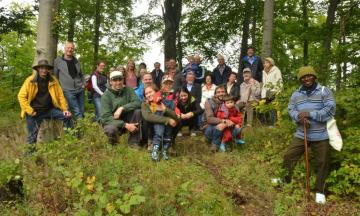 From 15th to 17th of September SALEM invited friends and former residents of the Children`s home in Stadtsteinach to celebrate the organization`s 60th anniversary. Samuel Müller, Gottfried Müller`s son, welcomed guests from all different nations including the UK, Russia and the United States. Among these guests was also the renowned journalist, talkshow host and author Thom Hartmann who is a part of the SALEM family since the late 70ies and has been a close friend of Gottfried Müller.

In the centre of this event were gatherings and conversations with old and new friends filling with life the idea of peace that was so important to the SALEM-founder. The weekend was opened on Friday with a walk on the Prophet´s Way that Gottfried Müller used to walk when trying to find new insights. Later on Keith Lindsey, chairman of Discover, inspired his audience with a speech on “Going back to the roots and discovering the future”. His charitable organization helps groups in Africa to rediscover lost knowledge about natural medicine. Thus people gain independence from modern medicine that is often unaffordable for them. SALEM supports his work by holding seminars in the African SALEM-projects. The evening came to an end with walking down memory lane and thinking about the future.

On Saturday the guests visited the gravesite of Gottfried Müller and lit candles in remembrance of his life and work. Afterwards Gbati Nikabou, project manager in SALEM-Togo, and project advisor Agnes Ziegelmayer gave a report on the daily work in Togo under the title “Impressions from SALEM-Togo – Reforestation against Desertification”.

On Sunday the gathering was officially closed with a devotion and prayers in different languages. We thank all that were involved in making this weekend so special and hope to see all of our friends again in the future.

Another catastrophe is hitting Uganda

Some days ago terrible pictures reached us from Uganda. Heavy rains caused rivers and even Lake Victoria to overflow. And now thousands of people have been driven out of their houses by floods; even hospitals, schools and bridges have been destroyed in many places.